Skeet is open Thursdays starting at 4PM and now that we have lighting on the field, up to 10PM. Skeet is also open the first and third Saturdays of the month from 10AM until 2PM, but I will keep it open after 2PM given sufficient activity. I would like to be able to open Skeet every Saturday, but I need a couple of volunteers to do so. As with everything that happens at Ontelaunee Rod & Gun Club, Skeet is operated solely by volunteers. Skeet is always included in the “This Week at Ontelaunee” email/newsletter, so be sure to read it and sign up for the newsletter if you aren’t already receiving it!

Skeet (and Trap) is only $6 per round (25 targets). Note that while we typically shoot a regulation round of skeet, you are welcome to shoot your 25 targets as you prefer, i.e., if you want to focus on crossing targets for example, you could shoot 25 targets at stations 2 – 6 as long as your squad mates don’t object (or I could run a round for you and others who want to do the same). It’s a friendly and accommodating group!

All gun actions must remain open unless in the gun rack or while loading the gun on the shooting station. Guns are only to be loaded when you are on the shooting station! Target loads with a maximum of 1 1/8 ounce of #8 or 9 Shot is ideal; 7 ½ shot is also allowed but not ideal.
Ear and eye protection is required to be worn at all times while near active shooting. Safety first.

Thursday shooting runs from April thru the end of October; Saturday skeet is open is year around, weather permitting.  Thursday hours are 4 PM until 10PM and Saturday skeet is 10-2.  I’m willing to open other days and hours if there is interest, if you’d prefer an introduction to skeet on a personal basis or if you’d like to work on specific stations or drills rather than shooting a regulation round of skeet.  You can contact me at the number or email listed below.  All you need is a shotgun and shells with 7 1/2, 8 or #9 shot.   The clay birds are only shot roughly 20 yards away, so a more open choke like Skeet or Improved Cylinder is best and there’s no need for other than light shooting target loads.  Most of those who come out and try skeet become ‘one of the regulars’; it’s truly an enjoyable and challenging sport!  No matter what your current skill level, it will improve quickly.

Are you a Sporting Clays Shooter???

While skeet is an interesting and challenging game unto itself, are you aware that many of the top Sporting Clays shooters use the skeet field to practice and work on their skills? Many, if not most, of the presentations seen in Sporting Clays are encountered on a skeet field. Outgoers, incomers and crossers are the game of skeet.

The National Sporting Clays Association’s Chief Instructor, Don Currie, is a huge fan in using skeet to practice for Sporting Clays. In his book “Mastering Sporting Clays” (which I highly recommend), Don Currie dedicates a full chapter (Chapter 18, “Practice”) to the use of skeet to develop your shotgun skills. Don states that “When I reach a plateau in performance or feel that I might have developed a flaw in my game, I regularly turn to the skeet field for practice”. He goes on to quote Craig Hancock, coach and father to Olympic Gold Medalist Vincent Hancock, who says, “There is no better place than the skeet field to learn and teach the fundamentals”. Other top performers in the sport agree.

Don mentions various reasons why skeet is such an optimal training arena including repetition with fewer variables, the comprehensive array of target angles and the ability to develop and refine your pre-shot routine and mental game through skeet. He also includes a defined drill in his book that he calls “The Grid” to be used on a skeet field. If you’d like to work on your Sporting Clays game, come out on Thursday or Saturday, or if you’d like to work on specifics, contact me and I can meet you at the club for individual practice.

Ever shoot skeet at night?

Yes, at night! We have installed an LED lighting system on our skeet field and are now able to keep skeet open until 10PM. If you’ve never shot skeet under the lights, you really owe it to yourself to experience it! Watching an orange target explode like fireworks against the night sky is satisfying and exhilarating. 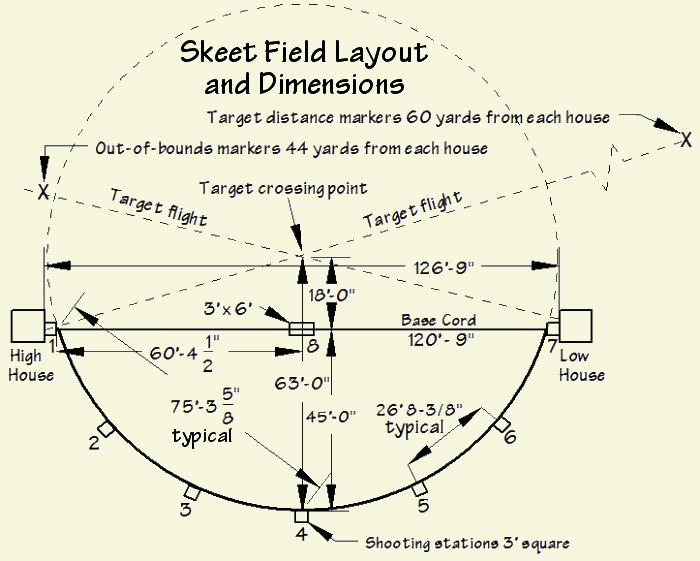 The Skeet range has a High House on the left and a Low House on the right, each housing a trap machine which throws the targets from their windows at 17-degree angles from the base cord across the target crossing point, which is 18 feet straight out from the center of Station 8. Each house sits three feet outside the circle, exactly at the rear of the shooting pads of Stations 1 and 7.

Here is a great link for more information on Skeet: www.claytargetsonline.com